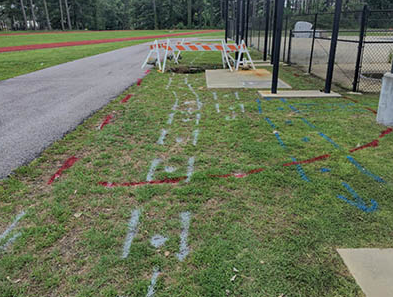 Ground Penetrating Radar Systems was requested on site to perform a GPR investigation for underground utilities in an area where soil boring drilling will take place. The GPR 400MHz antenna as well as Radio Detection were used to detect a conduit, water line and other unknown utilities crossing through the area.

The average max GPR depth penetration of the 400MHz antenna is 4’-6’ in the Birmingham area. Depth indications were marked with each utility detected with GPR.

Utilities that were known to be larger lines such as water and drain pipes were marked with hashes on each side of the utility. Smaller utilities such as light pole conduits were marked with only a singular line. The customer used the findings from this GPR investigation to appropriately adjust the drilling locations so that no utilities were struck in the process.

The GPRS contact serving the greater Birmingham, AL area is Andy Foshee and he can be reached at 205.410.0243 or by email at andy.foshee@gp-radar.com